This week I have had the wonderful ‘pleasure’ of two job interviews.  Now, I would never say that, as an unemployed person looking for a job before her money runs out, job interviews are a bad thing, but they are frustrating.

On Monday I went to the face-to-face interview connected to the phone interview from last Thursday.  It was a 45-minute bus journey followed by a 20-minute walk to the rather modern and very streamlined office (which backs RIGHT onto the trainline but is nowhere near the train station).

I was 30-minutes early, which is par for the course for me, and though I had expected to wait I was happily surprised when I was taken right into the meeting room and the interview began.  I was asked some pretty unusual (and some normal, run-of-the-mill) questions and then asked to do a 30-minute writing test.  I have to admit that, though I was warned, the writing test was a bit of a surprise.  Not, as you might expect, because the job has very little to do with writing, but because I was invited to just write anything. Now, I could have written something to do with one of my ongoing stories, but instead I chose to write about meeting Darcy (the post I wrote there was better than the one I wrote when I got home – at least I hope so).  Now it’s just a case of waiting…apparently I will hear any time between today (Thursday) and next Monday; so please, keep your fingers tightly crossed for me.  I really want that job.

Tuesday was a day of rest; well, as much as it could be given the fact that I have to, unfortunately, spend an expected 7-hours a day searching for work.  I spent time doing even more research on Ragdolls (I really cannot wait until I pick her up – another pic of her is at the end of the post).

On Wednesday I had an interview for which I was so unprepared it’s unbelievable.  I hadn’t read the additional materials the recruitment consultant sent me, hadn’t visited the website for more than 5-minutes and hadn’t even planned the way I was going to get there (apart from looking up the time of the bus).  I arrived just 3-minutes early (though this could also be blamed on the fact that we got stuck behind an ambulance following a nasty motorbike/car accident on the main road) and then the person interviewing me was nearly 10-minutes late.  There was nowhere to sit while I was waiting so I had to hang around in the reception area looking like a prize plum until I was collected.

The interview was very quick, over in less than 30-minutes and I have to say that I didn’t get the warm fuzzies.  I am a bit of a computer geek underneath it all; they were very girly, it’s a beauty brand and I am a girl who barely remembers to use moisturiser on a daily basis, let alone putting on make-up and doing more than putting my hair in a ponytail.
UPDATE: Just got a call and didn’t get the job from yesterday.  Apparently, I am too techy and not enough creative.  As much as the latter comment annoys me the fact that I didn’t get it actually made me sigh with relief because I didn’t want it (and that’s the honest truth).  Unfortunately, they also provided feedback and though I performed ‘adequately’ in the interview setting I apparently (though I don’t remember) provided negative feedback about previous employers.  Anyway, it wasn’t the job for me, and I think I knew that before I went to the interview (as I had almost decided not to go in the first place).

Anyway, today is Thursday, my second day of rest for the week.  I am going to do some more job searching (even though I am still holding out to hear a positive response about the job I interviewed for on Monday)…starting to doubt myself a little bit and am now over-thinking every single answer I gave in the interview; was I too perky, too negative, did I unintentionally say something bad about someone I used to work with, did I answer something in the wrong way?

Anyway, I have no control over the decisions that are made by other people, the only thing I can do is be who I am and hope that’s enough.

Anyhow, as promised, another picture of Darcy with her brother (the kitten I originally went to get): 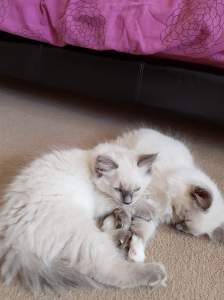